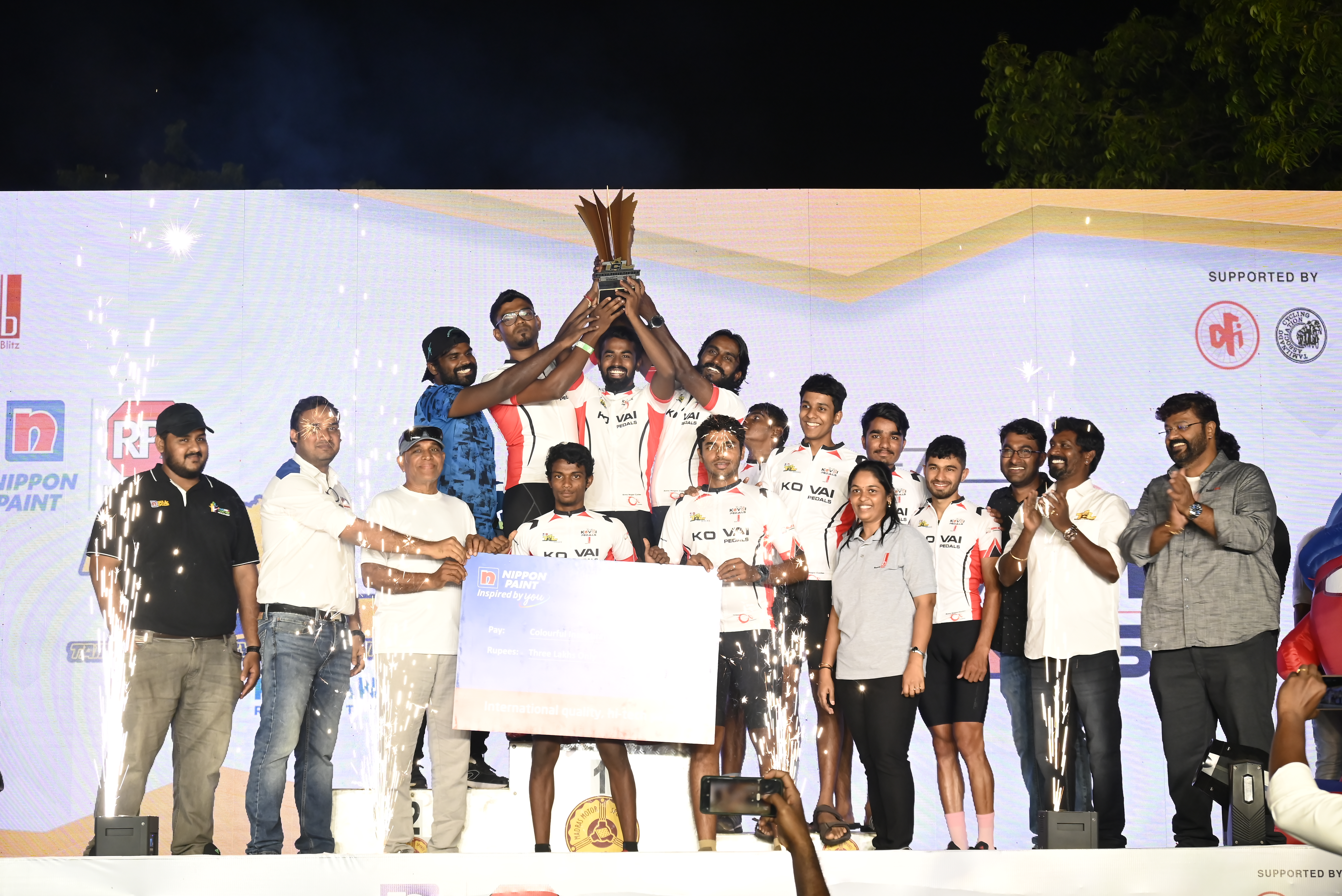 Chennai, November 20, 2022: The prestigious Tamil Nadu Cycling League (TCL) concluded with a spectacular race this Sunday. TCL was planned in two phases and the first phase was held in Chennai in August. The Finale was organized on 20 November 2022. The champions of the coveted TCL trophy are Kovai Pedals. The team emerged as winners and won a cash prize of 3 Lakh along with the Championship Trophy. The first runners-up team were Rancycers, who won 2 Lakh and the second runner-up team was Madras Pro Racers who were awarded 1 Lakh cash prize.

The event was presided over by Chief Guest Mr. Ashok from Nippon Paint India, who felicitated the winners and participants. He expressed his happiness for being a part of such an innovative League comprised mostly of youngsters. He hoped that the league would grow in the coming years and benefit more cyclists.

The jubilant winning team was ecstatic about the win and the awaiting crowd welcomed the squad with loud cheers and fanfare. Speaking at the event, Captain Srinath of Kovai Pedals said that winning the TCL trophy is a proud moment for the team. Their hard work has been recognized and helped them win. He added that tournaments like TCL motivate and encourage riders to take cycling as a professional sport and participate in many National and International events. As champions, they have a platform to showcase their talent and aim for bigger goals like the Olympics

TCL is the dream venture of Anna Nagar cycles. They partnered with leading event management team Brand Blitz and organized Tamil Nadu Cycle League. Anna Nagar Cycles (ANC) is a bicycle company which produces and distributes cycles with the brand name ’CycleOn’. They have branches across Chennai, Chengalpattu, Pondicherry, Thiruvannamalai, Chittoor and Bangalore. They are also the only Indian distributor of the Japanese brand ‘Kaze’, and Indonesian brand ‘Element’ and have major dealerships in other international brands. ANC’s founder Mr.Sudhakar has spearheaded TCL from its inception. He is a popular motorcycle champion himself and has won the National Motorcycle championship 7 times.

Brand Blitz’s Dr.J P Leelaram is an avid cycle enthusiast and has interest in cycling as a sport. He congratulated the winning team and said that events like TCL help explore the professional capacity of the sport and not use cycling as just a health or leisure activity. These championships bring out fresh talents which catapult the sport higher on the world stage. He added that cycling as a sport is in its nascent stages in India and support from like-minded organizations like Brand Blitz will hugely benefit the sport.

Kovai Pedals team owner Ms Rekha congratulated her team and said she is immensely proud of them for winning the TCL tournament. She said that the win will propel them to perform better in the next edition of TCL. Kovai Pedals are a refreshingly young team with 14 members of which 4 riders are under 18. The team includes two national players Kesavaraj and Purushothaman. Elite National category player Sreenath is the team’s captain. Ultra cyclist Prashant is the vice-captain.

Mr. Onkar Singh President of the Cycle Federation of India complimented the teams and praised TCL for initiating the first cycling league in the country. He hopes the league will grow further and the league will give exposure to budding cyclists. He mentioned the prize money will also drive emerging cyclists to pursue cycling as a sport. CFI helps regulate and promote cycling as a sport and will shortlist deserving cyclists and encourage the players to compete in International tournaments.