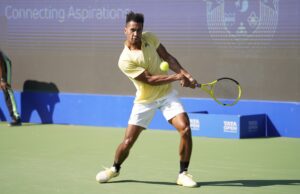 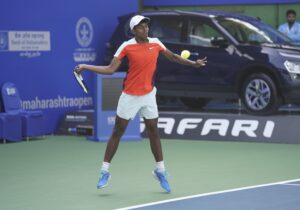 Pune, January 2, 2023: Rising India star Manas Dhamne put up a gutsy show on his ATP Tour debut but ended up with a hard-fought loss against the World No. 113 Michael Mmoh 2-6, 4-6 in the singles opening round match at the Balewadi Stadium in Pune on Monday.

The 15-year-old tennis prodigy began the match confidently and even bagged the opening game of the match aggressively by conceding just a point against the 24-year-old American in that game. Dhamne was handed a wildcard at the South Asia’s only ATP 250 event for his impressive performances recently.

Playing in front of the home fans, the local boy Dhamne made the former World No. 96, Mmoh work hard for each point

“I was a bit nervous before the match but as I went onto the court and played a few points, I felt good. The first point was really important. It calmed me down and the nervousness went away,” Dhamne said after the match.

The American pocketed the first set 6-2 and even carried the momentum in the next by taking a strong 5-1 lead. But, the reigning Asian Junior champion Dhamne refused to give up and fought-back hard as he almost took the match into decider by bagging three successive games to make it 5-4.

However, Mmoh, who has played all four Grand Slams, used all of his experience to tilt the game in his favour in the end.

“I had a chance, maybe the match could have been different. I am happy with the way I performed. It was a really good experience. I will try to improve when I play the next tournament,” the talented youngster, who has also been selected for the Grand Slam Player Grant Programme 2023, concluded.

The ongoing edition of South Asia’s only ATP 250 event, which is being conducted by the Maharashtra State Lawn Tennis Association (MSLTA) in association with the Government of Maharashtra for the fifth year in Pune.

Another Indian player, Sumit Nagal will kickstart his campaign later on Day 1 of the main draw against Filip Krajinovic.

The prestigious tournament, owned by IMG and managed by RISE Worldwide, is sponsored by Tata Motors.

The tournament will go on till January 7.