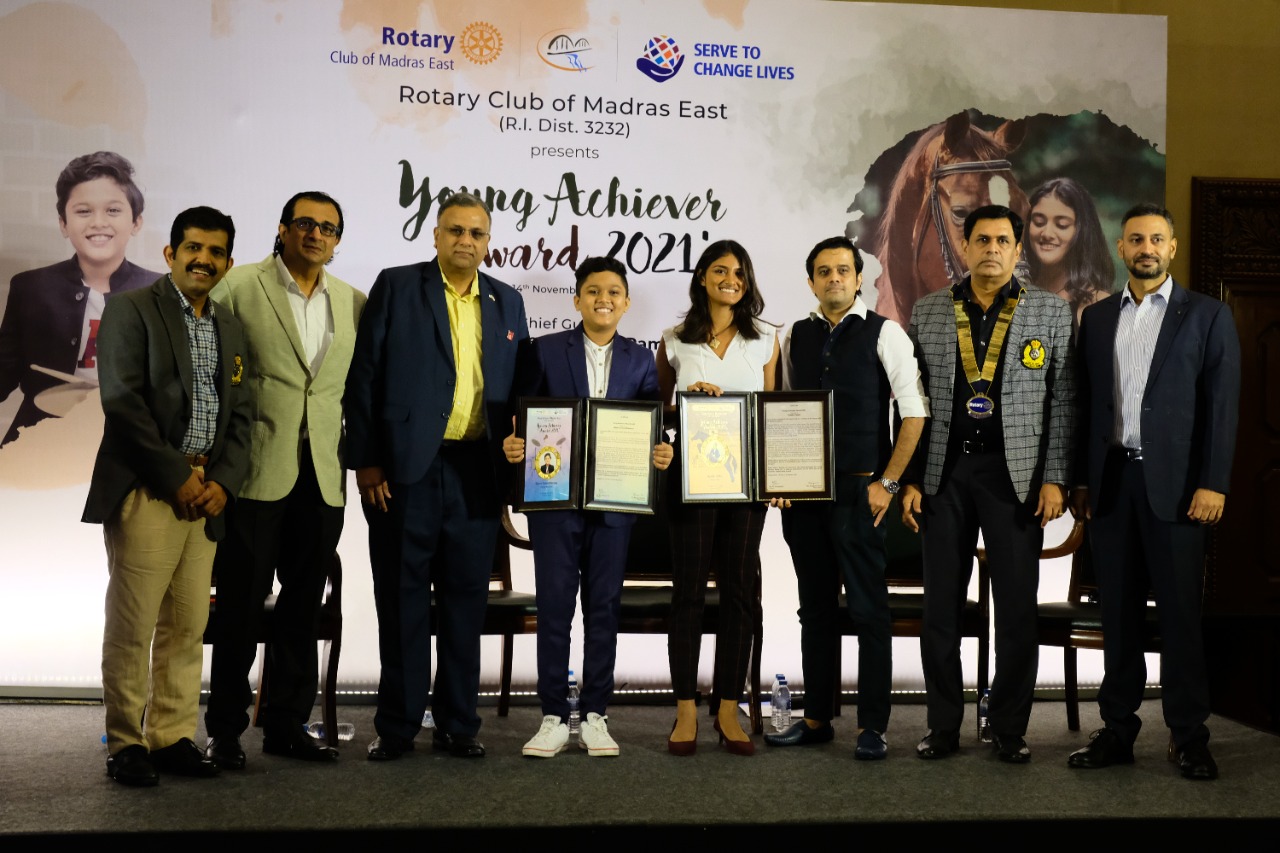 This Children’s Day, Rotary Club of Madras East recognizes two young achievers: Steven Samuel Devassy for Music and Tiyasha Vathul for Equestrian Sports with Young Achiever Awards 2021. The award function was presented at 11 AM on November 14, 2021 at GRT Convention Center, T.Nagar, with Mr.Sameer Bharat Ram, an Entrepreneur and Film Producer presiding as the Chief Guest.
The ‘Young Achiever Award’ was initiated in 2011 by Rotary club of Madras East and is sponsored by Rotarian Murugavel Selvan. This award is given annually to promising youngsters from various fields including music, arts, sports, education, technology, social works, and literature. The award is an attempt to motivate budding young achievers who believe in the quality of perseverance. This award recognizes their hard work, talent, and their desire to excel in their chosen field.
Every year the ‘Young Achiever Award’ has been awarded by means of a systematic and structured selection process. Nominations received through various sources are subjected to scrutiny by a panel of Judges who evaluate the achievements on various parameters. The proud recipients of this award in the past years have included child music prodigy Lydian Nadhaswaram and Harshwardhansinh Zala who invented a landmine detection drone.
About the Awardees:
Tiyasha Vathul
Tiyasha Vathul is a 17 year old equestrian show jumper. She started riding at the age of 5 and hopes to represent India at the Asian Games and the Olympics. She trains at United Riders Barn, Bangalore under coach Mr. Nitin Gupta. She also trains in the United Kingdom, at the renowned Talland School of Equitation in Gloucestershire under the tutelage of Ms. Pammy Hutton and her daughter Ms. Pippa Hutton, who have represented the United Kingdom at various world sporting events.
Her accomplishments include:
● Competed in the Junior National Equestrian Championship 2020 held in New Delhi and won the following medals: Individual and team Golds in Showjumping, Team Gold in Dressage
● Overall Junior Champion in Junior National Equestrian Championship 2019 held in Bangalore.
● Asian Equestrian Federation Dressage Championship – Won Silver medal and was chosen to represent India in the Under -21 Dressage Championship, Taipei
● Winner – South Zone at FEI world jumping challenge held in Mumbai
● Adjudged Best Rider in the Junior Category in 2018 and 2019 in Equestrian Premier League
● Participated in Junior National Equestrian Championships in Pune, New Delhi and Bhopal in the years 2015, 2016 and 2017.

Steven Samuel Devassy
Steven Samuel Devassy is a 14 year old child prodigy with acclaimed skills in both singing and playing the drums. He is recognized as one of the fastest child drummers and has been invited by leading music academies from the USA. He is brand ambassador for ‘Zildjian’, the world-famous Cymbal manufacturer. He was selected as the ‘Young Genius of India’ by Network 18 and Byju’s App for his musical skills.
Steven is the youngest child in the world to complete the grade 8 drums exam from the Trinity college of London, with a record score. Some of his songs on YouTube have crossed 60 million views. He has performed with legendary artists like Padmasri Sivamani, Mandolin U Rajesh, Veena Rajhesh Vaidya and many more.
His accomplishments include:
● Winner of EEMA ‘Emerging Artist of the Year 2020’
● His rendering of the song ‘10000 reasons’ on YouTube has crossed 64 million views
● Featured on NETWORK 18- Byju’s Young Genius Show
● Performed at Airtel super singer show on Star Vijay Network. India-West Indies one day international, Kochi, A R Rahman’s KM Music Conservatory, International Children’s film festival, Hyderabad, International film festival, Mumbai and many more.