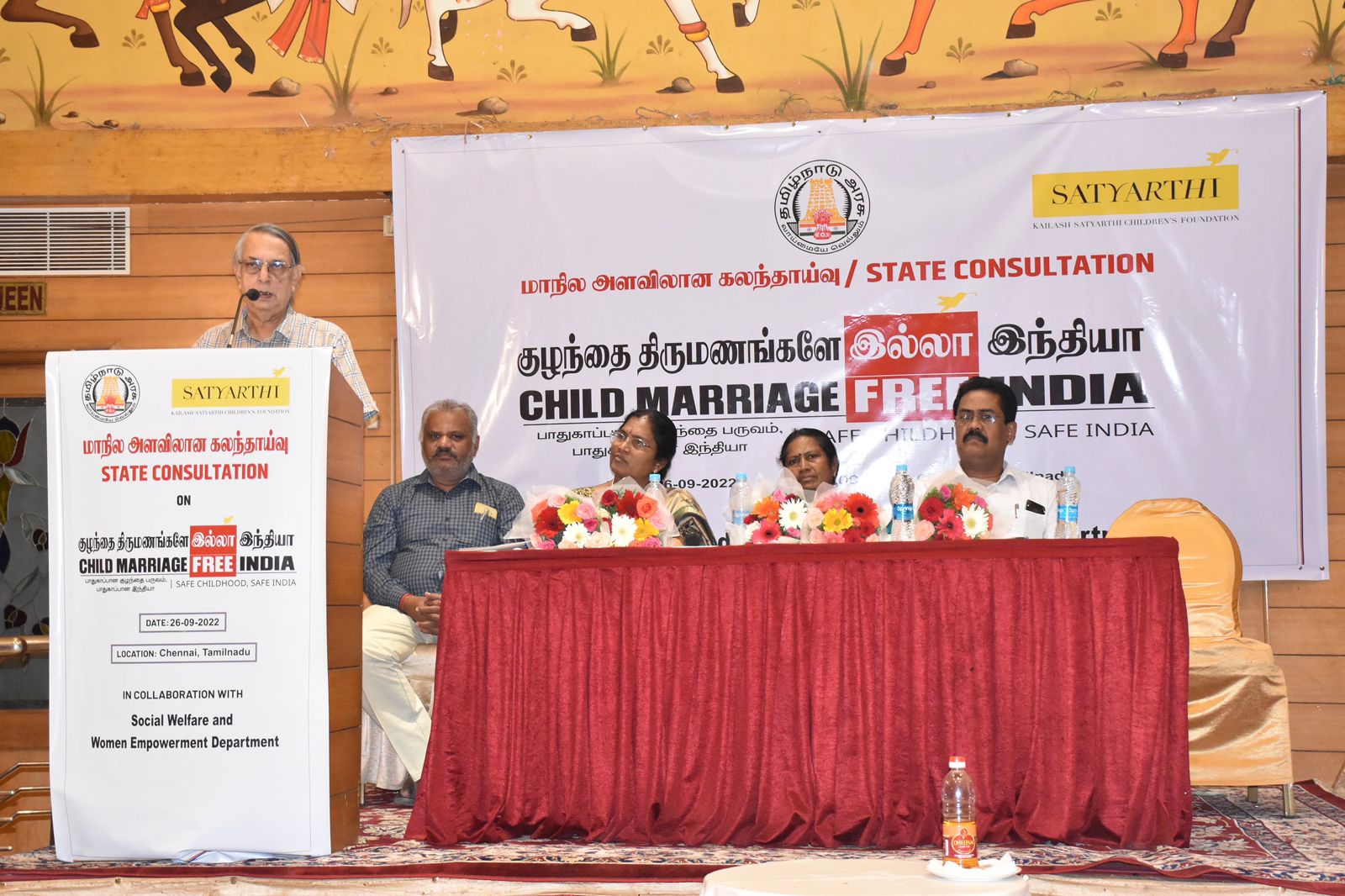 Chennai, 26th September 2022: Nobel Peace Laureate Kailash Satyarthi’s Children’s Foundation (KSCF) announced their upcoming campaign “Child Marriage Free India” campaign in the state today. This was announced through a state consultation that was held to mobilise all stakeholders of child protection to move together and help in the realisation of Child Marriage-Free India. KSCF has co-organised the consultation with the state Social Welfare and Women Department. KSCF has started nationwide consultations after the recent appeal by Kailash Satyarthi for a sustained campaign across the country to make India child marriage-free.

At the state-level consultation the key points discussed were appointment of Child Marriage Prohibition Officer (CMPO), mandatory FIR registration in cases of child marriage and incentivization of parents to motivate them to not marry their under-age children.

The National Family Health Survey-V (NFHS 2019-21) reports that nationally 23.3% women between the age group of 20-24 were married off before attaining the age of 18. In this context, the state of Tamil Nadu assumes much importance, as according to the report of National Crime Records Bureau of 2021, during the last 3 years, there has been a continuous increase in victims of child marriage in Tamil Nadu. It increased from 46 in 2019 to 169 in 2021. Further, 2011 Census reported, 3.8 lakh children were married off before attaining the legal age of marriage in the state. It seems there has been under-reporting of child marriage cases and non-registration of such crimes in the state.

The consultation deliberated on pertinent issues linked to child marriage and legal applications to stop the evil practice. Among the key issues discussed in the consultations included mandatory registration of FIR in cases of child marriage to ensure appropriate action takes place, linking child marriage with Juvenile Justice (care and protection) Act and POCSO Act for penalising the perpetrators of crime. Further, it was deliberated on appointment of CMPO at the district level across the country and adequate and proper training to the official and incentivization for the parents.

Dhananjay Tingal, Executive Director of Bachpan Bachao Andolan, sister concern of KSCF said, “Child marriage is an evil practice and should be looked as a crime against children. It negatively affects the physical and mental development of children. All stakeholders must make collective effort to stop the practice. In this regard, our organization under the leadership of Kailash Satyarthi will work closely with the state government, law enforcement agencies and civil society groups towards a child-marriage free Tamil Nadu”.

Speaking on the occasion joint director of department of Social Defence, Sundari said, “Our department is very happy that a state consultation regarding a burning issue is being held physically after the difficult Covid period. We have been working on the complaints filed by Bachpan Bachao Andolan and we will keep working together closely. This meeting will definitely prove a milestone in our fight against child marriage. And I believe that by 2030 India will become child-marriage free”. Highlighting the adverse impact of child marriage on children and why we must act to stop the social evil.