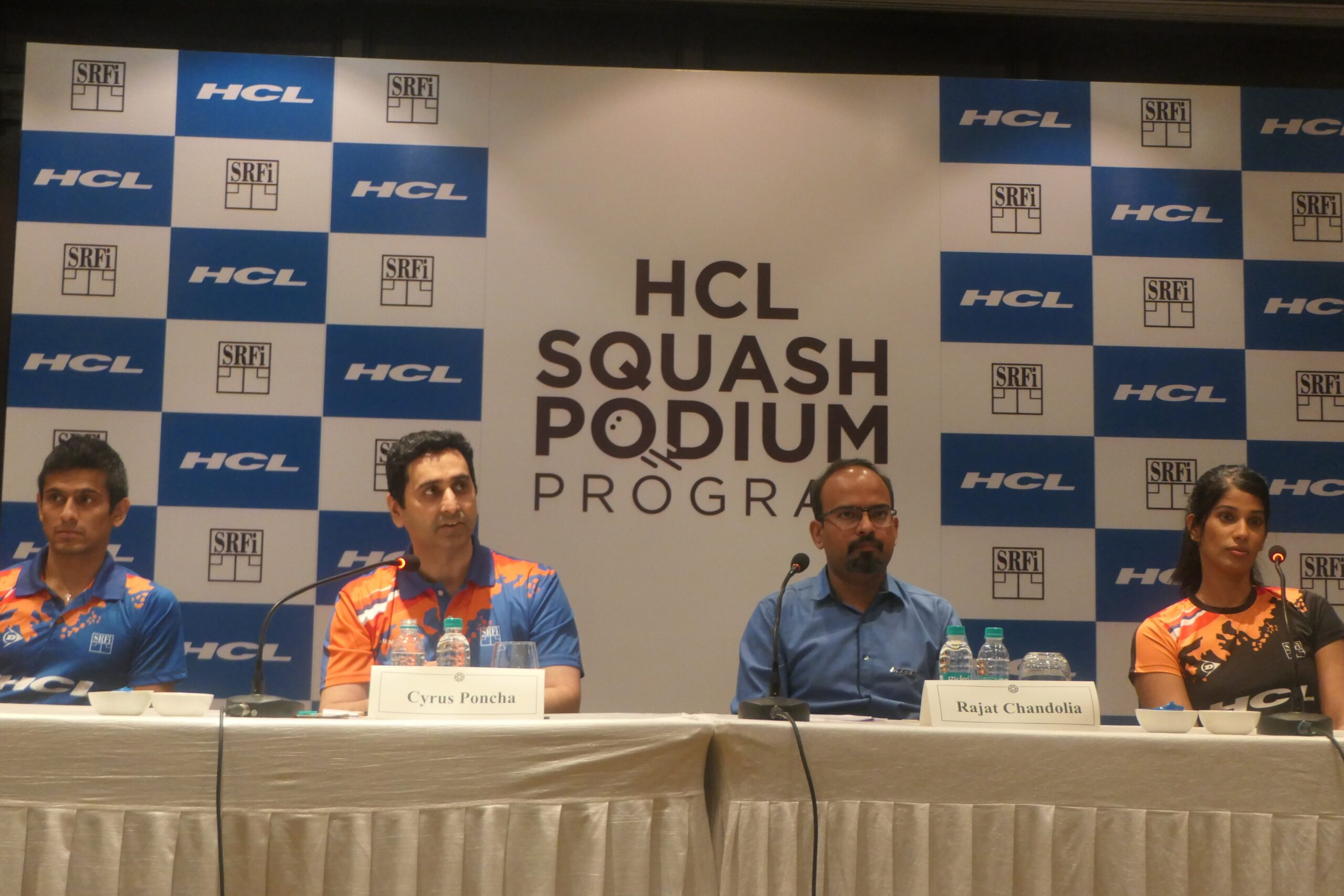 Chennai, July 12, 2022: HCL, a US $11.5 billion global conglomerate along with the Squash Rackets Federation of India (SRFI) today announced new initiatives as part of the HCL Squash Podium Program to significantly improve the Squash ecosystem in India over the next five years. The multi-pronged program will nurture existing senior and junior Squash players and help them finish at the podium at major international events including the Commonwealth & Asian Games. The program will also help enhance coaching standards and encourage and identify the next generation of Squash players in the country through grass-roots initiatives.

The HCL Squash Podium Program will host multiple initiatives including:

· High-Performance Camp for Commonwealth Games 2022 and World Junior Championship: The two-week performance camp will be held from July 11 to 25 for seniors and juniors with top national and international coaches, including Chris Walker, Gregory Gaultier & Sebastien Bonmalais. These camps will be geared towards improving game strategy and tactics, strength, conditioning and nutritional direction. Individual player assessment reports will be created during these camps by leveraging sports science, to offer customized guidance to each player and help them perform better. Graeme Everard, an experienced physiotherapist from England will accompany the players for the Commonwealth Games, starting July 25th.

· Grassroots Squash – HCL and SRFI will work to broad-base squash and increase participation by identifying and nurturing untapped talent across the country. Talent at the grassroots level will be identified and nurtured through inter-school tournaments and local clubs. As part of this initiative, HCL will support institutions to build squash courts, offer curriculum & technical support to institutions with existing squash courts, enhance coaching standards and ultimately reward players with ranking points and exposure to move to the top of their game.

· HCL Indian Junior Open – Keeping in mind the above initiatives, HCL will aim to increase the number of participants in the junior category. This will be organized as a Platinum event under the Asian Squash Federation (ASF) calendar (the highest level championship in the Asian Circuit) and will be rated as a Six-star tournament by SRFI. The top players from this tournament will receive ranking points which will add up to their junior Asian rankings in the relevant age group.

· Multiple coaching camps and referee clinics – HCL and SRFI will work towards capacity-building and skill enhancement for existing Indian coaches and referees and benchmark them to standards recommended by World Squash Federation (WSF). HCL and SRFI will also host referee clinics along with each PSA tournament to help improve refereeing standards.

Announcing the HCL Squash Podium Program, Mr. Rajat Chandolia, Associate Vice-President and Head, HCL Brand said, “HCL aims to multiply the potential of not only individuals but society at large. HCL has been a long-term investor in promoting and nurturing India’s sports ecosystem, especially those sports which have remained outside the spotlight. We launched the HCL Squash Podium Program in 2019 and conducted junior tournaments, PSAs and training camps for the coaches. As the world returns to normalcy post Covid, we are thrilled to create an enhanced program that will encourage and support not just existing players, but also create a grassroots movement for Squash in our country, ultimately adding brilliant players to the country’s repository and delivering sporting success on the global stage.”

Mr. Cyrus Poncha, Secretary-General, Squash Rackets Federation of India said, “Indian Squash is gaining popularity as a competitive sport with the success of players like Joshna Chinappa, Dipika Pallikal, and Saurav Ghoshal securing important international wins for the country. Our joint effort with HCL, has helped India rise to the third place behind Egypt and the UK among countries with the highest globally ranked players. In less than a year of launching the program, Indian players with world rankings increased to 54. This is a testimony to the powerful impact committed corporates such as HCL bring to the sporting ecosystem. Over the next five years, we would like to build a strong community of squash talent to enable India to dominate the world stage.”

In the past, HCL partnered with SRFI for HCL Junior Squash tournament, HCL Senior National Squash Championship 2017 and 2018.