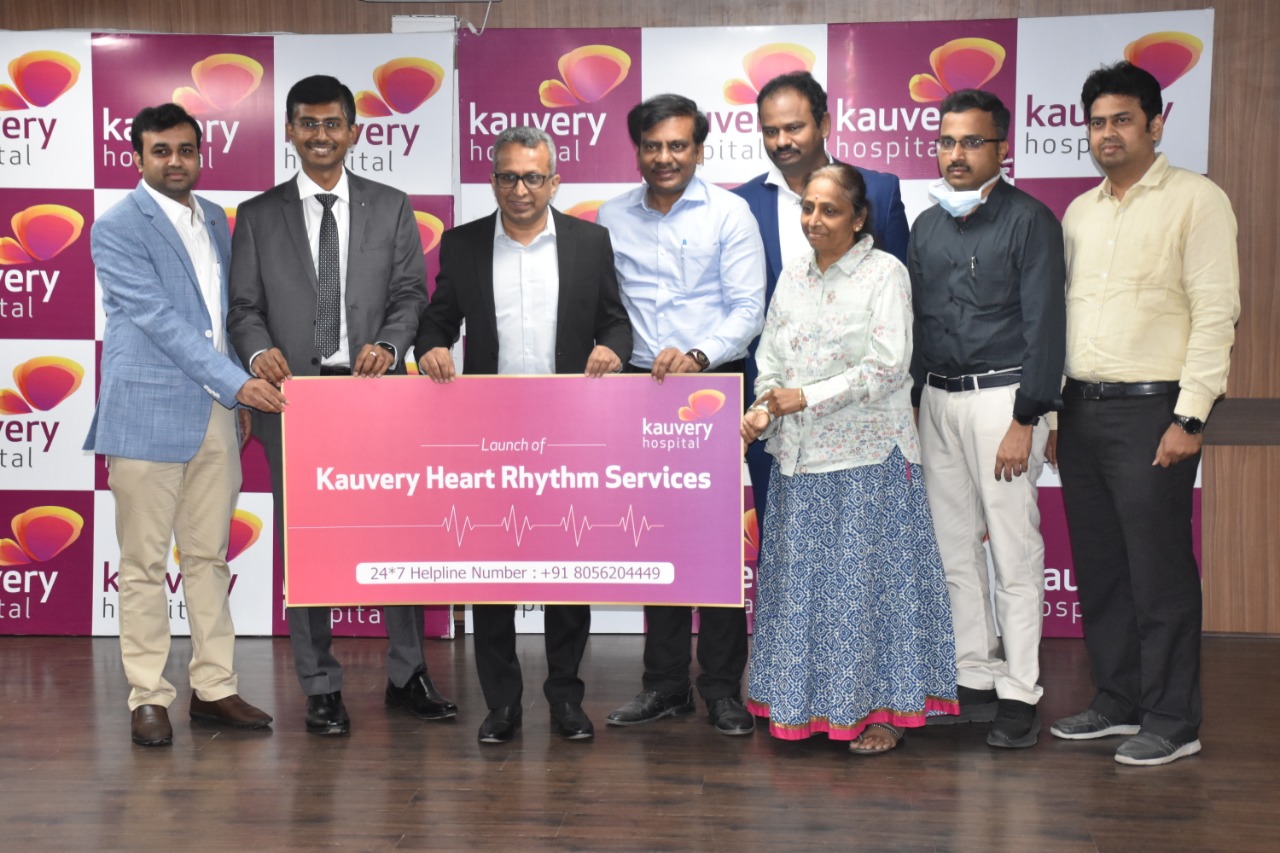 Chennai, 19thJuly 2022: Kauvery Hospital Chennai, a unit of Kauvery Group of Hospitals, a leading multispecialtyhealthcare chain in Tamil Nadu, successfully performed three life-saving procedures on a 55-year old woman with dangerous cardiac arrhythmias (heart rhythm problems).
Mrs. Radha Balaji, a 55-year-old school teacher, presented to the emergency department with an acute illness. She was diagnosed to be having an acute myocardial infarction (MI; heart attack), complicated by bradycardia (slow heart rate) and cardiogenic shock (failure of the heart to pumpblood efficiently to the body, causing the blood pressure to fall to dangerous levels).
Immediately she underwent emergency primary angioplasty and stenting to the blocked vessel (right coronary artery). In view of the cardiogenic shock, she required hemodynamic support from an intra-aortic balloon pump (IABP) to safely undergo the procedure. She repeatedly had multiple episodes of ventricular tachycardia (VT), which is a very dangerous heart rhythm abnormality during and after procedure.She needed atleast 14 shocks from an external defibrillator.
Speaking on the condition and the multiple procedures, Dr. Deep Chandh Raja- Clinical Lead ofCardiac Electrophysiology at Kauvery Hospital Chennai said, “This clinical scenario is called a post-MIVT storm; the patient was very much caught in the eye of the storm. The VT did not revert to normal with medications. Her status was furthercomplicated by the presence of mitral valve prolapse and long QT syndrome(anatomical and electrical abnormalities respectively.Hence, on the 4th day, she was taken for a radiofrequency ablation procedure (a procedure to destroy the cells that cause arrhythmias)at the Hybrid Cath Lab operating room. An advanced 3-dimensional navigation system was used to find the source that was triggering the ventricular tachycardia. After a 6-hour long and arduous procedure she was made free of the VT.Her blood pressure and hemodynamics promptly improved. As she had a predisposition to dangerous heart rhythms, she also receivedimplantation of a percutaneous defibrillator onthe next day to protect her from such episodes in the future.She underwent cardiac rehabilitation during the following days in the hospital with graded mobilization and nutrition. On day 14, she was discharged from the hospital and was home.”
“The state-of-art infrastructure, the Hybrid Cath Lab and a well-coordinated team of Cardiologists, Cardiac Anesthetists and Cardiac Surgeons at the Kauvery Hospital, gave me the confidence to perform these complex procedures on the patient. Without this procedure, it would not have been possible to pull the patient out of the VT storm.” added Dr. Deep Chandh Raja, who has returned from Australia after a 3-year advanced training in Cardiac Electrophysiology from Canberra hospitals and the Australian National University.
Dr. Sundar C, Senior Consultant Interventional Cardiologist,who is the primary treating Interventional Cardiologist said,“Timely angioplasty saved her from a massive heart attack and cardiogenic shock. It was a difficult situation when she also had a VT storm during and after procedure, which was due to her inherent long QT Syndrome. The Cardiac Electrophysiologist ensured that the patient had no more VT by performing the ablation procedure. Managing the situation might not have been possible without the necessary infrastructure. The support from the hospital team and the trust from the patient’s family helped us to achieve this success.”
Speaking on the successful treatment, Dr.AravindanSelvaraj-Co-Founder and Executive Director, Kauvery Hospital Chennai said, “While the primary percutaneous angioplasty was a life-saving procedure by itself, radiofrequency ablation of the dangerous heart rhythm was also crucial to save the life of this patient who was in a VT storm. The hospital, which is well equipped with ECMO, Hybrid Cath labs, and the necessary infrastructure,along with internationally trained Cardiac Electrophysiologists, can treat such complexities in heart rhythm disorders. I congratulate Dr.C Sundar, Dr. Deep ChandhRaja and the team for saving the life of this wonderful school teacher.”
Kauvery Hospital is the only hospital in Tamil Nadu to have a team of four Cardiac Electrophysiologists (Heart Rhythm Specialists)- Dr Deep Chandh Raja S Consultant Cardiologist and Clinical Lead – Cardiac Electrophysiology(Chennai), DrSakthivel, Consultant Electrophysiologist (Chennai), Dr P Vijay SekarConsultant Cardiology and Cardiac Electrophysiology (Trichy) and Dr T Joseph, Consultant Interventional Cardiologist & Electrophysiologist (Trichy). The hospital also has a three 3-dimensional electrophysiology navigation systemat Chennai, Trichy and Tirunelveli.
One can get in touch with the Heart Rhythm specialistsfor opinions through a dedicated 24*7 helpline number via telephone or WhatsApp on +91 8056204449. In case of queries, one can also write to heartrhythmservices@kauveryhospital.com.